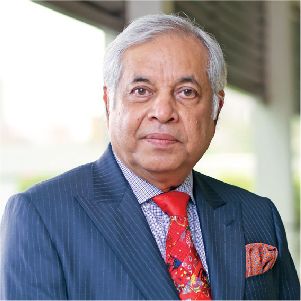 Dr. Pradeep Chowbey belongs to the cadre of the pioneer laparoscopic surgeons in India. One of the first to perform Laparoscopic cholecystectomy in North India

Dr. Pradeep Chowbey is a world-renowned pioneering laparoscopic surgeon. With over 45 years of surgical experience, he has trained more than 20,000 surgeons from around the world in minimally invasive surgeries. He is one of the first to perform laparoscopic cholecystectomy in North India and the first to perform MAFT (Minimally Invasive Fistula Technology) in the Asia Pacific Region. He has graphed his career with singular determination to develop, evaluate, and propagate Minimal Access, Metabolic & Bariatric Surgery in India, and the Asian subcontinent.

His Institute at Max Healthcare was the first to receive the Center of excellence accreditations in India for Metabolic & Bariatric Surgery, Hernia Surgery by Surgical Review Corporation, USA (2011-2014).

With over 85,000 surgeries to his credit, he featured in the Guinness Book of Records 1997 and Limca Book of Records 2000 – 2020 (consecutive twenty years) as the first Endoscopic surgeon performing most number of minimal access surgeries.

Dr. Chowbey was awarded PadmaShri Award for his contributions to medical science and was the Honorary Surgeon to The President of India (1997 – 2017). He also authored more than 300 original scientific papers in international and national indexed journals. Dr. Chowbey formulated the Minimal Access Surgery - Guidelines and Recommendations (2002) and also on Metabolic & Obesity (MOSI) surgery in 2008 & 2010 and the worldwide guidelines and recommendations for hernia surgery with a core group of experts: “Guidelines for laparoscopic (TAPP) and endoscopic (TEP) treatment of Inguinal Hernia (International Endohernia Society (IEHS)” in 2012, revised in 2014.