Here is the link https://www.maxhealthcare.in/blogs/suffering-from-advanced-colonic-cancer-provided-a-new-lease-of-life-with-multivisceral-resection

A 60-year-old patient from Haldwani suffered from Colorectal Cancer and experienced recurrent vomiting, along with poor oral intake, leading him to reach a cachectic state (loss of muscle and fat) visited Max Hospital, Vaishali.

Talking about the case, Dr Vivek Mangla, Director, Gastrointestinal and Hepatopancreatobiliary (GI & HPB) Surgical Oncology, said, “The patient was in complete agony when he first arrived at Max Hospital, Vaishali. Although the patient received chemotherapy earlier outside of the hospital, he responded only partially and ultimately defaulted from the treatment. After coming to us, he was thoroughly evaluated with PET-CT, which showed a significant increase in the tumour size than before with both partial colonic and high-grade duodenal obstruction. Our team consulted the Tumour Board and decided to give the patient curative intent treatment. After several tests, an initial nutritional build-up was planned with nasojejunal tube feeding and an En Bloc Whipple with radical (D3) right colectomy done a few months later.”

In right colectomy, the patient undergoes removal of the diseased part of the colon to provide relief to the patient and detach the part suffering from cancer, while an En Bloc Whipple was done to surgically remove the entire tumour without violating its capsule. The procedure requires resection of the lesion with a continuous margin of healthy tissue.

“Even though the procedure was complex, the patient made a swift recovery, getting discharged a week after the procedure and the post-operative period being uneventful. All the margins present in the biopsy earlier were cleared after the procedure. With cases of colon cancer on the rise, spreading awareness about various treatment modules is key in battling cancer. A good treatment plan followed by a perfect execution is what helped us provide the best possible treatment in this case", Dr Vivek Mangla.

There are several advancements being made in the field of science and technology regularly with Max Super Speciality Hospital, Vaishali, with its dedicated cancer treatment team and state-of-the-art infrastructure, along with cutting-edge technology always being at the forefront of treating patients suffering from advanced stages of abdominal cancer. 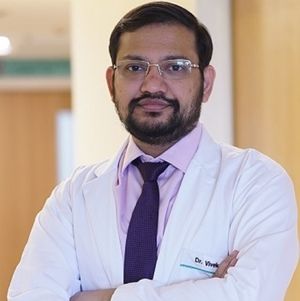