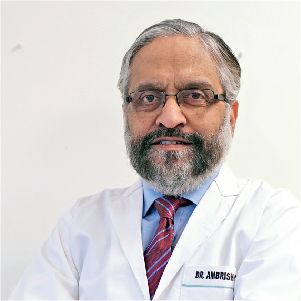 Ambrish Mithal is an endocrinologist and the Chairman and Head of Endocrinology and Diabetes at Max Healthcare – Pan Max, Saket, New Delhi, where he started working in December 2019.

Dr. Mithal was honored by the Government of India in 2015 with Padma Bhushan, the third-highest Indian civilian award, for his outstanding contribution to the field of medicine. He is the winner of the 2021 Laureate Award, International Excellence in Endocrinology Award, given by the Endocrine Society US in 2020, for his outstanding contribution to the field of endocrinology. He has won other prestigious awards like the International Osteoporosis Foundation President's award in March 2016 and the BC Roy Award in March 2017 given by the President of India for his contribution to the development of endocrinology in India. In 2019, he has also been nominated to the Governing Council of the National Health Authority, the apex body involved in implementing the ambitious population health coverage plan of the government. He has also been appointed (honorary) President, All India Institute of Medical Sciences, Gorakhpur.

Dr. Mithal did his MBBS (1980) & MD (1984) from Kanpur University and then he secured his master’s degree (DM-1987) in Endocrinology from All India Institute of Medical Sciences. He was a Fogarty fellow at Harvard Medical School 1993-94.